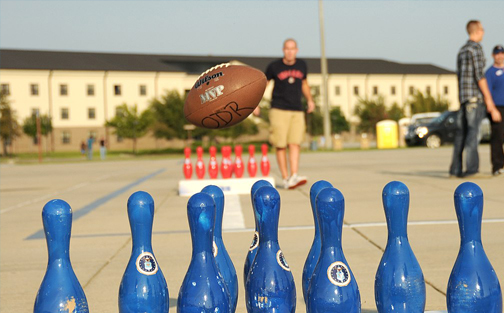 Fowling is a hybrid game that combines the equipment of American football and bowling into one sport with a similar layout as horseshoes and cornhole. Fowling is played one-on-one, in teams of two, or with doubles play where teams stand on opposite ends called lanes.

Like bowling, each match is broken down into frames. In match play, one frame is completed when all pins are knocked down on either lane. The team that accomplishes this first wins the frame. The game is over when a team wins two out of three frames. A tie occurs when the team that throws last knocks down all the other team's pins. In the case of a tie, overtime is invoked in a sudden death contest to determine the winner. Both teams place one pin anywhere on the fowling lane for their opponents to throw at. A coin toss determines who throws first and no equalizer throw is allowed. The team that knocks their opponent's pin down first wins the match.

In doubles play, teammates are positioned on the same lane and throw at the opposing team's lane. Like football, the game starts with a coin toss where the winner is granted the decision whether to fowl first or choose a lane to defend and defer to the other team to decide on fowling first. Each team alternates throwing the football at their opponent's pins while also alternating fowlers within the team. Each player has 20 seconds to throw starting from their intention on throwing.