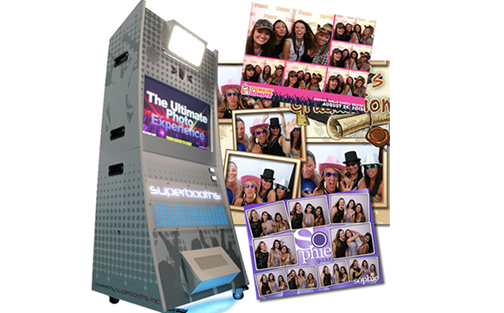 New Open Air Version of the World famous Superbooth. Updated open sleek design gives all guests at the party a glimpse into the excitement.

New Open Air Version of the World famous Superbooth. Updated open sleek design gives all guests at the party a glimpse into the excitement. As the World’s first interactive photobooth it puts the users in front of a professional photographer who leads them through a six or nine-set photo shoot.

The virtual photographer encourages and guides the users — and offers tips on how to strike a pose — amid a pulse-pounding soundtrack and a flashing light show. The photo-shoot experience is intensified when a powerful fan blows back the hair of the subjects (we’ve all seen shots where a fan was used to blow a model’s hair around).

SuperBooth allows guests to select from five photographers and five backgrounds; once chosen, the photo shoot begins. An announcer reads instructions, which are complemented by graphics displayed on a 42″ HD in-booth monitor. The lights go up, the music starts, the fan blows and then the photographer appears. In 90 seconds, he directs the user through nine poses. A large interior capacity allows as many as eight guests to get in the picture.

The final output appears on a 6″x 9″ print of all nine poses. Add-on packages can include Full Branding on the finished photo and on the entire outside of the booth itself. Social media upload, master flash drive and deluxe frame options are also available. Superbooth Photo Booth for Bar Mitzvahs, Sweet 16’s, College and Corporate Events in Boston and New York